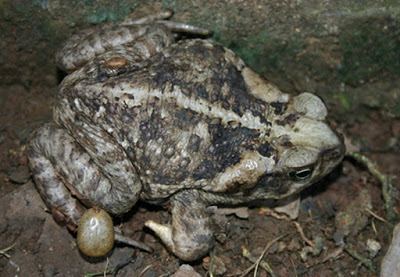 Well well, who would have thought my late night adventures with my now friend toad would get me to start writing again on this blog after years of not doing so… It happens that I stayed up till midnight getting different things done, and when I was about to go up to bed, I spotted the grandpa toad hanging out in the house. I went ahead and looked over at him and realized with disgust and utter amazement that he had like 5 different sized ticks on him. OMG. I had never seen that. One of the ticks was so gigantic I couldn’t believe a tick of that monstrous size was even possible!

I immediately thought of how much I would love to take those ticks off him (or “HER” for instance, for I don’t now how to determine the gender of my friend other than with the given male gender of the spanish word sapo). I definitely couldn’t bring myself to do that. Or could I??? Heck Yes! I would at least try, the “Poor Innocent Creature”. So I went and got an old pair of tweezers. I assumed he would jump as soon as I approached closer to execute the plan, but to my surprise, he did not jump. I was afraid of him tossing poisonous milk at me or something. Instead, He was all stillness… Maybe, all gratefulness. Yes, I think he knew what I was up to. I took out one. Two. Three, the big huge one!, uughhhhh!. And when I went for the fourth, right next to his eye, the darling just closed his eye tenderly… Yyyesssss!!! I was able to pull all out and drown them horrible critters of Beelzebub! The sight of me must have been a pretty funny one, for sure. If a stranger could have seen me, maybe I would have been thought a “Witch”, working toad witch-crafty spells right at midnight, Hahahaha! Maybe… if like in the fairytales, this guy is a magical toad… well, maybe, yes, maybe, why not?… he can grant me three wishes to pay me back the good deed. HA!, funny enough, my mind stayed blank thinking what I would ask if suddenly he turned into an “Old Wise Magical Wish Granting Wizard” What immediately came to mind was just: “May the flow of guests be always steady and enough to keep covering the salaries!” Hahaha!!!… I don’t know why not just ask for a big huge trunk of GOLD instead. I guess I like my work. Just keep it coming!

Here’s What People Are Saying About Rentals

Register with your email

Please enter your username or email address. You will receive a link to create a new password via email.